I didn’t see as many new movies in 2018 as I have in years past, and I never see as many as I want. That’s what the combo of kids and life does, but the trade off is certainly worth it. For one thing, I saw more animated films this year, and great family flicks like BumbleBee, which was close to making this list. But I still made time to see the films I knew I should at some point, and I saw some greats, some that disappointed, and a couple that were downright bad.

To nobody’s surprise, 2018 had plenty of despair to go around. Creatives love to latch on to the most dramatic headlines and moods in the culture, and shape their stories accordingly. Existential despair, tech addiction, the environment, it was all represented in spades. Some of it worked brilliantly, much of it didn’t. There was also hope to be found, and hope is what lies beneath the tense surface of my favorite movie of the year.

“Honorable” Mention: Death Wish – Stick with me here… Eli Roth and Bruce Willis’s shameless remake of the Michael Winner/Charles Bronson vigilante joint knows just how shameless it is. This is a hardline conservative’s masturbatory dream come to vivid, blood-soaked life, the story of a liberal softie who, once his wife is murdered and daughter raped by home invaders, decides it’s high time to awaken his inner Republican and becoming a gun-toting avenging angel. It’s all a little amusing, and a little absurd, with its fantasized depiction of gun culture (only the hottest blondes occupy these gun and ammo establishments) and a Chicago as a hellscape only Lou Dobbs could conjure up.

But this Death Wish is also more entertaining, and more visually interesting, than the original film, nostalgia be damned. And it’s great as an antidote to the type of canned, intersectional stories Hollywood has to make these days. It buzzes with a weird energy, and somehow Roth even manages to shoot certain moments – the home invasion for example – with a decent amount of restraint, allowing the audience to fill in the gruesome details for a change. Plus, as an added bonus, Bruce Willis appears to be completely awake the entire time.

10. Mandy – Trust me, when I first saw the images of a bloody Nicolas Cage wielding a chainsaw, or flashing an unhinged grin from behind the steering wheel of a car, I had the same thought: this guy will say ‘yes’ to literally any garbage screenplay that lands in his hands. But the buzz accompanying these early images, and the subsequent buzz from the festival circuit, was something… different.

Mandy is anything but Nicolas Cage mailing it in. It’s so much more, something new and original and crazy and tailor made specifically for all the tools The Cage has been sharpening over decades playing larger-than-life loons. That isn’t to say Mandy is some dumb genre dreck; no, Panos Cosmatos’s picture is a lush and vibrant macabre thriller with chainsaw fights and tripped-out phony gurus and demons and all kinds of awesome shit. It’s an explosive phantasmagoria of sound and color that should be respected for going all the way.

9. You Were Never Really Here – Lynne Ramsay’s mood piece about a troubled Veteran who tracks down missing girls, all the while struggling to keep a grip on his own slipping sanity and the fact he is dissolving into the background of his own life, is not an easy film to digest.The first viewing, for me, was cold and obtuse, too grim to engage with.

The second viewing, however, changed my perspective on the sort of quiet magic tricks Joaquin Phoenix is executing with his character, simply called Joe. It’s an existential enigma of a film with a bleak outlook on PTSD, a story where the emotions seep through slowly, like the breaths of air Joe squeezes out from behind his plastic bags as he struggled to cope with the corruption of his own mind. It is Taxi Driver reshaped with modern anxieties and fears of alienation. 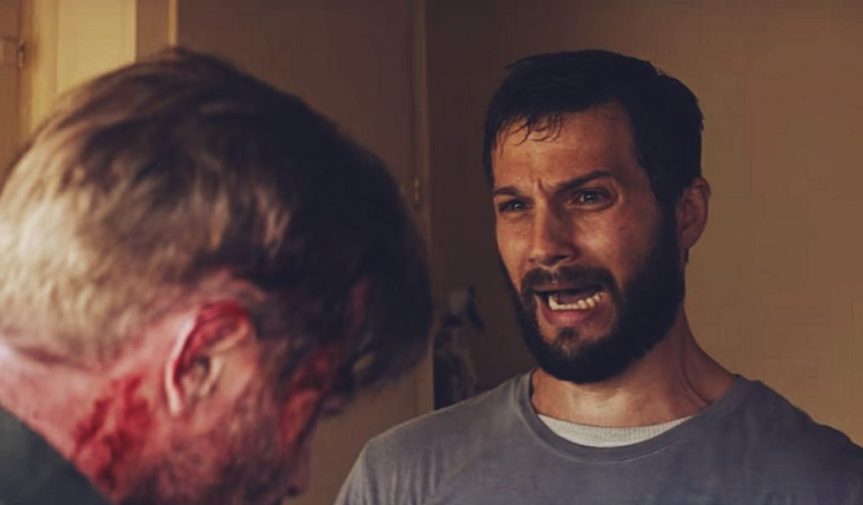 8. Upgrade – Leigh Wannell’s sci-fi actioner is a fabulous throwback to the kinds of adult-oriented genre flicks that were so popular in the early 1990s. This has echoes of Virtuosity, Universal Soldier, or Body Parts among others, but Upgrade has something those films are generally lacking: brains.

Upgrade ascends genre trappings by being lean and clever and original, a feat in and of itself given the fact the film got a wide release in June, alongside franchises and known quantities. Logan Marshall-Green has typically been (aside from an American Tom Hardy doppelgänger) quiet on the screen, the way he is in Karyn Kusama’s The Invitation. Here, he gets to have a little fun and be a little cocky, all the while maneuvering through a sharp, high-concept, sci-fi potboiler with plenty of action and blood splatter to please genre devotees.

7. Game Night – Jason Bateman has been the bright spot of so many poorly-executed R-rated comedies over the years that it’s nice to see the film elevated around him for a change. Bateman isn’t the main attraction in the brilliantly absurd Daley/Goldstein flick, and that’s refreshing in and of itself. Rachel McAdams gets a chance to show off some terrific comedic chops for a change, and virtually everyone in the group is great in their respective roles. Of course, Jesse Plemons’ Gary is the all star of the film, in a totally bizarro and hilarious performance that deserves a Supporting Actor nomination.

It all works together in sync. What’s so surprising is how well Game Night is shot, and how nice it looks. Cinematographer Barry Peterson uses the great transition sequences where the neighborhood and the cars look like game pieces, and the slickness of the production only bolsters a strong screenplay underneath.

6. First Reformed – Let’s be clear, I was never not going to like Paul Schrader’s latest. It was in the stars, and predetermined in the casting of Ethan Hawke, my favorite actor and an underrated master of range and talent. He can do just about anything, so pairing up with Schrader, who’s built an impressive writing and directing career off the back of the loneliness and despair in Travis Bickle’s troubled soul, felt like the perfect matchup of Thespian and Auteur. My art house sensibilities were firing on all cylinders, it was only a matter of how much First Reformed spoke to me.

It is a challenging film, some of the hardest and bleakest psychological ground Schrader has traversed since Taxi Driver. It’s a film I will most certainly revisit every few years, because the emotional impact of the hopelessness Schrader and Hawke so acutely visualize will change as I age. The final sequence of events, the most controversial of the picture for obvious reasons, are moments I will likely never forget, and I hope it’s enough to get Hawke a Best Actor statue.

5. A Star is Born – I was drawn to this from the first trailer, and I couldn’t figure out why. On the surface, A Star is Born isn’t the sort of film to which I’m eagerly anticipating. I haven’t seen the previous versions, but something about Bradley Cooper’s vision was inspiring, and Gaga’s voice pulled me in.

The maturity of first-time director Cooper, directing himself in a pretty audacious move, is hard to believe. He handles moments, both big and small, with incredible focus and attention to the story he wants to tell. It’s a marvel to see how he handles the material, and Lady Gaga’s performance is an equally as impressive debut. No matter what you’re typically into, there is something for everyone in A Star is Born, a moment somewhere in the film that will hit you harder than you would expect. 4. Avengers: Infinity War – For the last decade, I’ve enjoyed Marvel films. Every time I watch one, I have a good time, but it wasn’t ever a priority. I’ll see them when I see them, and was caught up in time to sit down for Infinity War, expecting to have another good time in a comic book film, this time with a substantial villain. It was a good time, but I had not expected, not for a second, to be as shaken as I was in the end.

It wasn’t just “The Snap” that got me. There are moments everywhere. When Thor is speaking to Rocket Raccoon, barely able to hold back tears as he lays out the tragedy of his life all around him, and you feel yourself choking up, that’s when you realize these films have worked on you in ways you hadn’t realized. You have history with Thor, you have an entire formative period of your life with these characters occupying some of that space, and when you cut to the emotional core of this penultimate Greek masterpiece, all the comic book elements melt away and you forget it’s Thor and a talking Raccoon. It’s a marvelous accomplishment, and it happens time and time again over two-and-a-half hours.

3. Mission: Impossible – Fallout – There isn’t much to say about Fallout. It rules, we all know it rules, and the evolution of this series is remarkable. Tom Cruise, whatever he might be in real life – whatever “real life” means for this guy – is an entertainer, and he sacrifices his body for our amusement. It has to be respected, and there isn’t much else as thrilling as the anticipation and execution of a Mission: Impossible set piece because of Cruise’s dedication to the stunts. He’s a madman, and if he’s cool with it so am I.

2. Annihilation – Alex Garland’s captivating sci-fi thriller pulls you deep into its orbit and slowly sinks its teeth in you in terrifying ways. Natalie Portman is as good as she’s been at any movie since Black Swan, and Jennifer Jason Leigh continues her great second act. Much like First Reformed, this is a film that will change and evolve over time, and the universality of its themes almost ensures it will be celebrated five, ten, twenty years down the road as an underrated masterpiece.

1. A Quiet Place – While it isn’t underrated by any measure, John Krasinski’s directorial debut is a masterpiece. Turns out, 2018 was the breakout year for bearded actors turned first-time directors. Who knew. Krasisnki’s horror film is scary, sure, but where it flourishes is in the exploration of the family at its core.

A Quiet Place knocked me sideways in its emotionally overwhelming story of parents struggling to keep their lives together in the middle of such unimaginable chaos, and a tragedy that shapes the course of their life forever. This is a story about monsters murdering us at the slightest sound, and the creature creation is great, but this is more a story about the responsibilities within the family unit. Each member has a role, and some are more personally tenuous than others, but it’s all motivated by the basest of needs: survival. This is yet another film I will revisit for years and years, and will absolutely change as my children get older. I love it, every part of it, especially this…