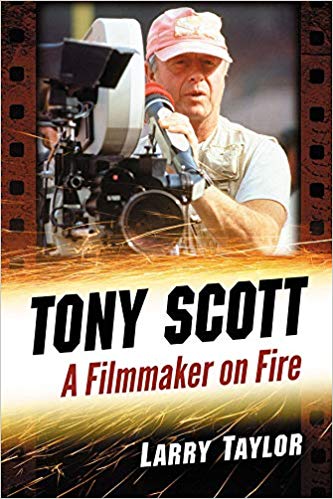 Tony Scott: A Filmmaker on Fire, my second book, is hitting bookshelves this January courtesy of McFarland & Co. Publishers. Paperback copies will be available first, followed closely by an eBook version. The story of Scott’s life and career is an exciting and tragic tale of a fascinating man who left us too soon, and with unanswered questions. He also happened to leave us with a few masterpieces, a handful of terrific action movies, and even a couple of fascinating head scratchers across his nearly four-decade career.

Die Hard was the first spark of motivation that drew me to the story of John McTiernan. With Tony Scott, it was True Romance, my favorite of his films, one of the best early ’90s crime dramas that belongs in the same company as Pulp Fiction and Reservoir Dogs as films that reshaped an entire genre. Scott’s story is one of success and failure, in equal measures it seems. He was always fighting to separate himself from his brothers’ incredible success – and prestige -embracing the underdog mentality in work and life.

From his collaborations with Jerry Bruckheimer and the hard-living Don Simpson, to his friendship with counterculture icon and LSD pioneer Timothy Leary, to an on-set affair, to multiple times the filmmaker’s research nearly got people killed, Scott’s life was full of as many friendships, as much adventure, and as much tragedy as any of the movies he directed.

Tony Scott’s energy was infectious to anyone around him. That’s certainly the vibe I got from the interviews I conducted for the book. His light burned bright and he was beloved, and from that endless well of determination came more than one masterpiece.

If you’re interested, you can purchase copies at McFarland, Amazon, and pretty much anywhere else you can buy books these days. I appreciate you taking the time. I hope you buy a copy for that Tony Scott fan in your life and they absolutely love it.